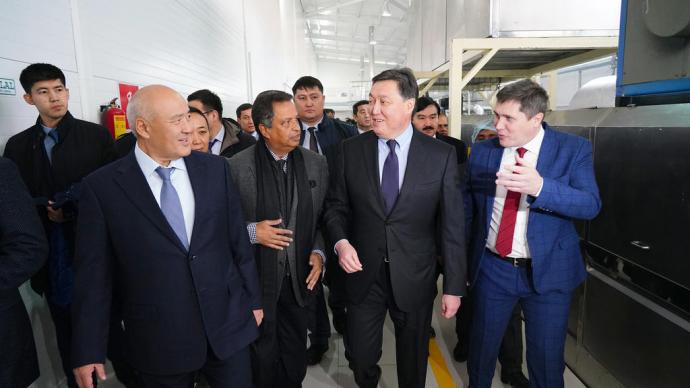 To ensure the implementation of the programs of Industrial and Innovative Development, the Economy of Simple Things, initiated by the First President – Elbasy Nursultan Nazarbayev, as well as the instructions of the Head of State Kasym-Jomart Tokayev on the socio-economic development of Shymkent and the Turkistan region, Prime Minister Askar Mamin went there on a working trip.

In Shymkent, the head of government attended the opening ceremony of the spinning mill of Alliance Trade and Industrial Company LLP, a joint venture of Kazakhstan Investment Fund JSC and the Alliance Textile Uzbek Association of Light Industry Enterprises.

The project was implemented in the framework of the agreements reached in June of this year between the governments of the Republic of Kazakhstan and the Republic of Uzbekistan on the creation of a joint textile cluster. Through the efforts of the parties, repair and restoration work was carried out in a short time and utilities were brought in, which ensured the launch of the factory, which had been idle for many years.

“The first President of Kazakhstan – Elbasy Nursultan Nazarbayev, set before us the task of developing the ‘economy of simple things,’ where light industry plays a special role. And we see the first fruits,” said Mamin.

The prime minister expressed confidence that the launch of the factory will give a great impetus to the development of the textile cluster in Kazakhstan.

“The Head of State Kassym-Jomart Tokayev has repeatedly noted the importance of attracting foreign investment in non-resource sectors of the economy of Kazakhstan. Taking into account the positive experience of Uzbekistan in the development of the textile industry, an agreement was signed on joint launch of a textile cluster in Shymkent on June 22, 2019, within the framework of the XVIII meeting of the Joint Intergovernmental Commission on Cooperation between Kazakhstan and Uzbekistan,” Mamin emphasized.

At the first stage, the company created 120 new jobs, the volume of cotton fiber processing will be 6 thousand tons per year. Investments of the Uzbek side in the project reached about 4.6 billion tenge.

Within the framework of the Road Map for the restoration of the textile cluster in Shymkent, it is planned to additionally launch two factories, which together will ensure a 2-fold increase in the volume of cotton processed in Kazakhstan and create 800 new jobs.

In the village of Maylyoshak, Kazygurt district, Turkestan region, Mamin attended the opening ceremony of the factory for the production of fast food products.

The project was implemented by CG Foods Central Asia with the support of KAZAKH INVEST. The comprehensive support included assistance in obtaing visa, customs procedures as well as in selecting a local partner, suppliers, distributos.

CG Foods Central Asia, the world's largest producer of instant noodles, has invested 5.7 billion tenge in the project and plans to provide work for about 300 Kazakhstanis.

The volume of products will exceed 4.5 thousand tons per year. In the production process, domestic raw materials will be used. The products are planned to be delivered both to domestic and foreign markets.